This will be a short walk – around ten kilometres – but I sense it is going to test me to my septuagenarian limits. I’m in Jogjakarta in Central Java, Indonesia. I’m planning to walk from my hotel, the Novotel, in General Soedirman Street, down the main axis that runs north – south through the centre of the city to the alun-alun square in front of the sultan’s palace. That’s the half way turn-around point. I’ll find a shady place to rest there, maybe a drinks kiosk or eatery. Then I’ll start back, retracing my steps for part of the way, stopping to rehydrate with a big ice-laden Coca-Cola at the McDonalds restaurant in Malioboro Mall. Then I’ll veer off across the Code /cho.day/ River through the Kota Baru neighbourhood to emerge on General Soedirman Street not far from the hotel. 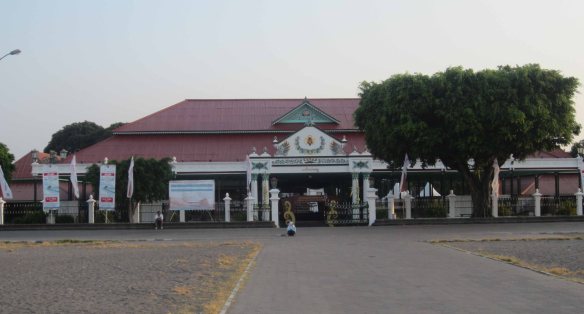 This is where I’m headed, the front portico (pagelaran) of the sultan’s palace in Jogjakarta

That’s the plan. The challenge is (1) to survive the afternoon heat (it will be over 30 degrees and very humid), and (2) survive the ultra-dense unpredictable traffic, the narrow footpaths cluttered with vendors’ stalls and parked vehicles, and the relentless crush of people. More than a test of stamina, the walk will be a test of concentration. The important thing will be to stay focussed, well hydrated and take it slowly. If I bomb out – if I succumb to the conditions – I can get home by taxi or becak pedicab, or even by horse-drawn andong carriage (hmmm… that last option is a temptation). And the hotel is right opposite Bethesda Hospital. So I think I’ve got my safety nets fixed up.

But wish me luck anyway.

I walked from the lobby of the hotel in the afternoon warmth of Tuesday, October 6th and crossed busy General Soedirman Street. I turned right and headed towards the small pillar-like monument at the north end of Jogjakarta’s two-kilometre-long main street. The temperature was a sliver above 30 degrees and it was quite humid. But the sky was very hazy and this filtered the harshness from the sunlight.

Instantly I stepped into an obstacle course, or so it appeared to my wary eyes. The tiled footpath was densely packed with parked motor bikes and, in some places, cars. Here and there I was forced to go around them by stepping into the traffic boiling past on the street. But I couldn’t just look left and right. I had to look down to check that my feet were not straying into the drainage ditches that flanked the path here and there. At the same time I had to keep my eyes raised, looking intently ahead to avoid the sharp edges of the awnings on street side stalls. They came at my tall body more-or-less at forehead height.

I stooped under a cloth awning propped up by bamboo poles. It stretched across the footpath to the edge of the street, so to avoid stepping around it into the street I had to duck my head and go straight ahead under it. I found myself in a small tent-like eatery where two ladies were standing at a table hammering and grinding spices, mixing them with crushed chilli peppers and carefully blending them in a concave mortar stone ready for the evening’s cooking. As I manoeuvred past my foot caught on a low plastic stool and toppled it towards an iron brazier that was smoking on the footpath. There was no danger, no emergency, no damage, but the two ladies grabbed the chance for a chat. I was pressed down onto a stool, a glass of tea appeared in my hand, and we exchanged introductions. They were Ibu (Mrs) Putri – wearing a red tee shirt over a practical calf-length skirt – and the older Ibu Sungkono – wearing a dark floral blouse over an ankle-length brown batik sarong.

Ibu Putri and Ibu Sengkono in their streetside eatery.

They had plenty to complain about but their complaints came with bright smiles. Their main beef was the celebration of Jogjakarta’s 259th birthday the following day.

“It will suck customers away from us into the centre of town,” Ibu Putri said with a resigned laugh.

I pointed out that the tee shirt she was wearing was stamped with a message promoting the anniversary celebration. She laughed again.

“The sultan wants us to support the celebration,” she said. “So of course we do.”

I left the tiny eatery and a few minutes later crossed the Gondolayu Bridge over the Code River. (Gondolayu means “the smell of death”… what a great name for a bridge!) To the left I saw a jigsaw puzzle of flimsy houses lying stacked one above the other up the bank of the river. They were painted in a kaleidoscope of bright colours. I recalled that a visionary Catholic priest, Father Mangunwijaya, had bustled past his more conservative colleagues in the neighbouring Catholic catechism centre and decided something had to be done about their demoralised, crime-ridden neighbours. He cajoled and inspired them to take pride in their settlement. New, healthier houses were built, trees and gardens planted, and paths repaired. The favela revived and to further lift spirits, the residents were given paint and encouraged to brighten up the whole precinct. Father Mangunwijaya died fifteen years ago, but his vision stuck. Today the riverside suburb is no estate agent’s fantasy, but its residents take pride in it and no longer see it only as a place to escape from.

The colourful favela on the banks of the Code River

A quarter of an hour later I was standing at the intersection famous for its small obelisk known simply as The Monument (Tugu). Built by the first sultan of Jogjakarta in the late 18th century, it is one of a series of landmarks connecting Jogjakarta with the guardian mountain Merapi to the north, and the realm of Nyai Roro Kidul, guardian queen of the southern ocean. This fragment of an ancient geography is alive and well. In fact as I stood pondering the Tugu I heard a clattering behind me. Chairs were being set in place for a ceremony to be held the following day (Jogja’s 259th anniversary) to formally open a new commemorative site. One corner of the intersection had been demolished and replaced with a flat, polished stone platform. On it stood a series of tiny models lined up to represent the sacred axis that fixes Jogjakarta’s place, and the sultan’s authority, in the world. From north to south in a straight line… mountain, tugu, palace, royal hunting lodge, sea. 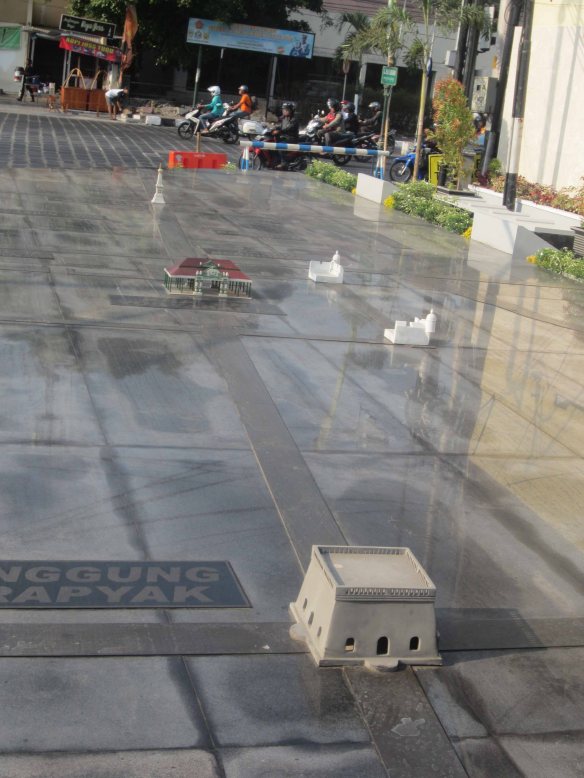 … and beside the Tugu a model of Jogjakarta’s sacred axis. Krapyak royal hunting lodge (bottom), the palace (centre) and the Tugu (top) are visible here.

I turned into Prince Mangkubumi Street and headed away from the Tugu along the two kilometres of arrow-straight thoroughfare that leads south to the palace. Halfway along its name changes to Malioboro and it turns into Jogjakarta’s famed shopping precinct. On both sides of Malioboro Street vendors jam the footpath, selling mostly batik clothes and touristy tee-shirts, but also antiques, jewelry, fake watches, traditional sweetmeats and garishly coloured drinks. In places the footpath is scarcely a metre wide. It is difficult to squeeze through as shoppers stand haggling or trying to prise the vendors away from their mobile phones. 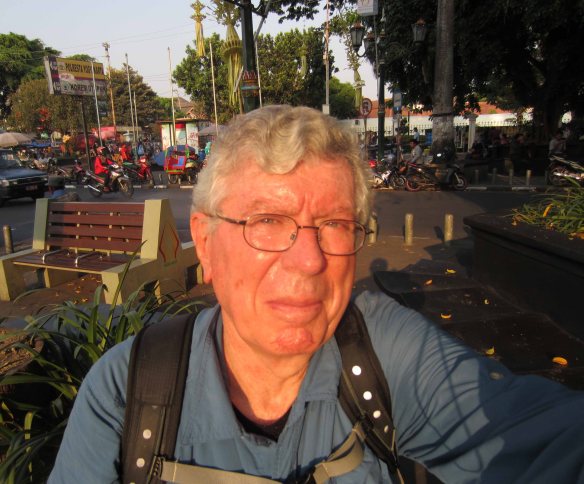 Looking into the setting sun at the bottom end of Malioboro. I’m about halfway through the walk.

At the bottom end of Malioboro – now about two hours into the walk and not far from the palace – I swerved away from Jogja’s old pre-Islamic axis and headed into the strongly Islamic Kauman. This is the crowded neighbourhood around the city’s main mosque where the kaum Muslim, the “orthodox” Muslim community, live. In its quiet alleys women are hooded with hijab scarves (called jilbab in Indonesia) and wear long tube-like shifts. The men wear the black peci fez caps or the white embroidered takiyah skull cap. Arabic dominates in names and signs and there are little shops selling religious books. The tiled, pyramid shaped roof of Jogjakarta’s old mosque rises modestly over the neighbourhood. As I approached it twilight was starting to spread its pastel blue across the sky. Presently the maghrib call to prayer would roll gently over the neighbourhood. It would draw unhurried eddies of worshippers from their houses and, for a short time, would still the shouts of the children playing dusty soccer in front of the mosque.

I turned away from the mosque and walked a few metres to the spacious, bare, sandy alun-alun square. On its south edge stood the low profile front portico of the palace, and ahead of me the two rather battered but still sacred banyan trees in the centre of the square. A small group of teenage girls, all wearing hijab scarves, were being coached in sprinting techniques. They lined up with their backs to the palace, crouched, and when their coach (a head-scarfed woman) shouted “Go!” sprang up and ran towards a finishing line stretched between the two sacred trees. Something deeply symbolic is going on here, I thought, but I couldn’t quite put my finger on what it was. 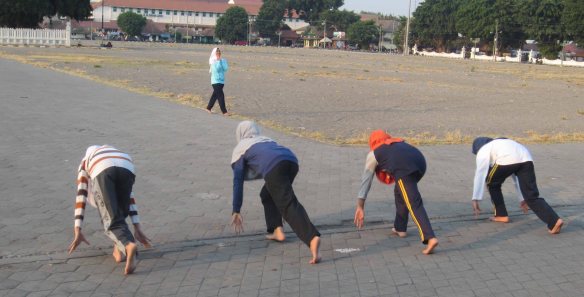 Athletes practice on the alun-alun square in front of the palace. The girls are running towards the square’s two sacred banyan trees (top image).

It was time to start back. I walked from the alun-alun to one of my favourite places in Jogjakarta, a nearby strip of cubicles and stalls selling magazines and books. I stopped to chat with my friends, stall holders Ibu Paimin and Ibu Mini. I asked after a particular title. Ibu Mini frowned for a second, sitting among half a dozen metre-high stacks of books under magazines hanging like dense washing from wires above. She pondered for no more than five seconds then her hand groped behind her and her fingers ran down a pile of books like fingers on a vertical piano keyboard. With scarcely a backward glance she extracted the book I was looking for.

I pose with my favourite bookseller, Ibu Mini. She says her name fits her stature.

My backpack was considerably heavier and my wallet somewhat lighter as I left the little book market. Night was falling and I hurried north along Malioboro towards its big shopping mall. I was thirsty, and only a Coke from McDonalds would quench that thirst. There, half way along the ancient axis that would be commemorated in a ceremony the following day, stood the golden arches of McDonalds. I almost ran up the steps into the dazzling glitz of the mall. Shamelessly I jostled ahead of other diners through the glass doors of McDonalds.

Fries with those smiles?

An hour later, back at the hotel, I noted that the walk had taken almost four hours (too many stops!) and I had covered 10.54 kilometres. I felt good, but as I prepared to take a bath I noticed that my black inner shirt, and my long-sleeve outer shirt, were crusted with big streaks of white salt, the dried residue of my perspiration. Hmmm, I would have to replace that somehow. Extra-salty French fries at McDonalds, maybe?

Mister! Can we practise our English with you?