You can measure a walk in steps and kilometres. I have a Garmin Vivofit wrist band that does this, as well as a Runkeeper GPS tracker app on my mobile phone. These devices are pretty accurate. They tell me that this morning Emmy and I walked 16,247 steps over a distance of 12.67 kilometres. But somehow this is not precise enough for me. I find it more scientific to measure a walk in terms of bananas consumed and bottles of Diet Coke drunk. By this measure today’s walk was a two-banana, one-Coke walk. It took us from home along Lake Tuggeranong through the parkland of Kambah and the suburbs of Weston Creek to Cooleman Court shopping centre. 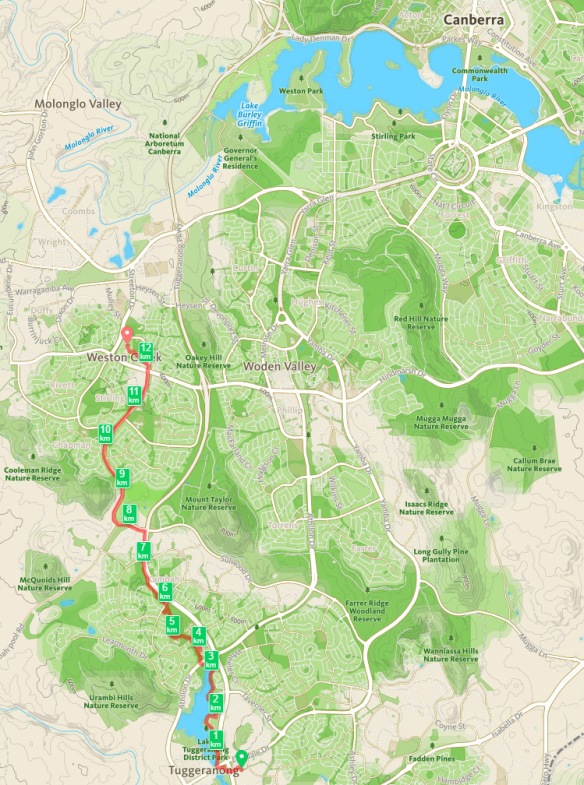 Our route from Lake Tuggeranong to Weston Creek. It took a little over three hours.

As always we were on the road at around 7.30 am. The temperature was minus-2 degrees, the sky cloudless, the air rigidly still. Have you ever noticed how slowly the sun rises in winter? It lays cold planks of sunlight across the landscape that somehow don’t move. It refuses to rise above the tree-tops. It is constantly sparkling among branches and flashing between tree trunks as you walk through parkland. It took us three hours to reach Weston Creek and as we approached Cooleman Court the sun was still yawning and stretching out along the ridge of the shopping centre’s roof. 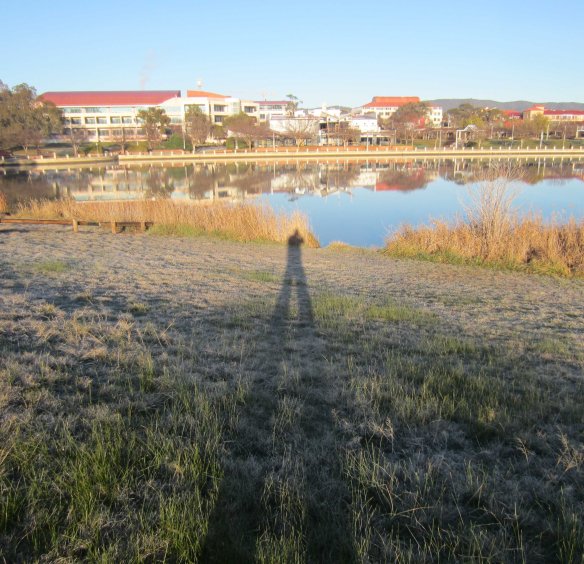 Lake Tuggeranong is oriented more or less north-south. From the familiar path along the east shore we looked down the rolled-out length of our shadows across the water to Tuggeranong College and the Hyperdome Mall. Their tranquil upside-down images were sliced by the scalpel of a rowing boat as a lone oarsman replayed last night’s Olympic races on the smokey water. 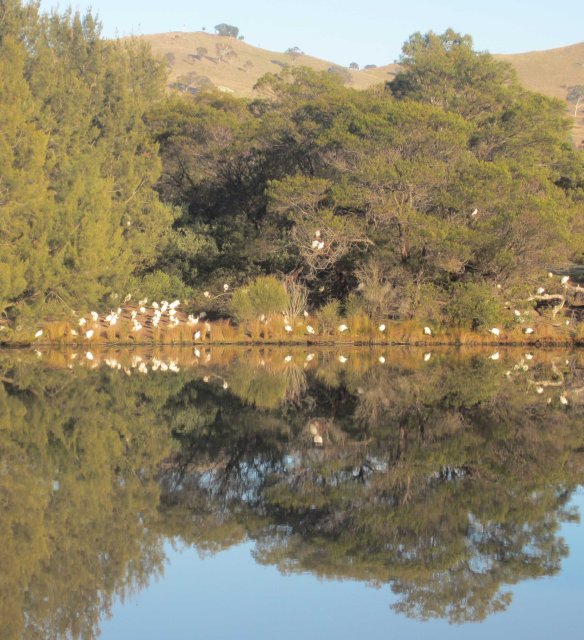 Ibis cranes enjoy the morning sun on the shore of Lake Tuggeranong.

Just off the north end of the lake we came upon a Lao Buddhist social centre, the Wat Lao Buddhanimit, a small but exotic-looking building with an orange-tiled Lao-style roof and brick fence posts topped with lotus buds. Buddha was reclining in the yard looking into the frosty sun and the grey silhouettes of Australian gum trees. He looked pretty much at home. 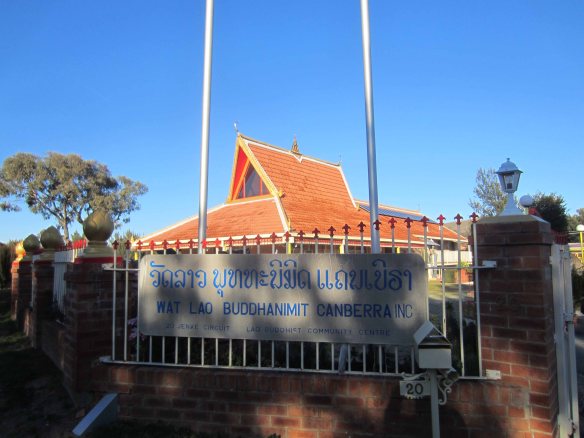 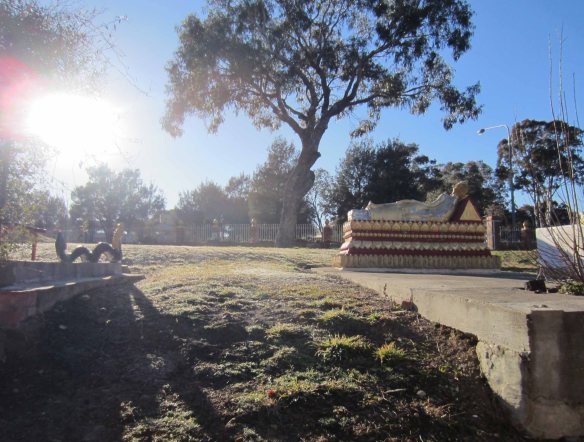 Buddha wakes up to the icy sunlight of a winter morning at the Lao community centre.

Further on I paused to grind my teeth as we passed a children’s play area. A sign warned that the skate bowl was “inherently dangerous and may result in injury to the person and/or property loss or damage.” Regular readers of this blog will have noticed I have little patience with the excesses of the “risk management” industry and their groupies in insurance companies, the legal profession and the crowded ranks of gormless parents (see for example: https://walktenthousandmiles.net/2012/04/16/review-across-europe-alone-on-foot-aged-eighteen/ ). By nagging us incessantly about risk avoidance – even the tiny risks of a playground – they are doing damage to the resilience of Australian children. And it’s not just children. My special bête noire is the warning screen that precedes many television programs, programs that some anonymous individual thinks may put you at risk of being discomforted by reality. You’ve seen them.

“The following program has content that may concern some viewers.”

(This is not a sarcastic exaggeration… it is quoted here verbatim from several ABC television programs.) Last time I saw this dumb announcement I almost threw a shoe at the TV set… but I thought better of it and threw a sock instead. The TV was not damaged and I felt a little calmer. 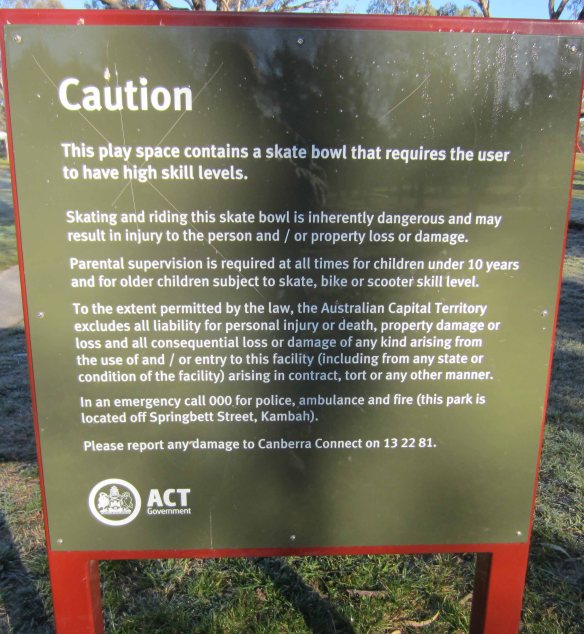 Watch out kids! Death awaits you in this playground.

Not far from the mortally dangerous children’s playground we came to the battered remains of a woolshed. Originally built in the late 19th century it has been partially rescued and turned into a picnic shelter. It is a low-key but exotic reminder that Canberra has sprawled across what was once productive farmland. Right beside the woolshed lies a community garden. Crusted with frost, its many small plots were full of kale, cabbage, broccoli, silver beet and a multitude of little-known vegetables like Japanese komatsuna, daikon and bekana cabbage. The garden is a tribute to the determination of local people, many of them recent migrants, to fight back against the urban neutering of farmland fertility. As they turn the soil they have found old horseshoes, and the metal parts of horse-drawn ploughs and carts. 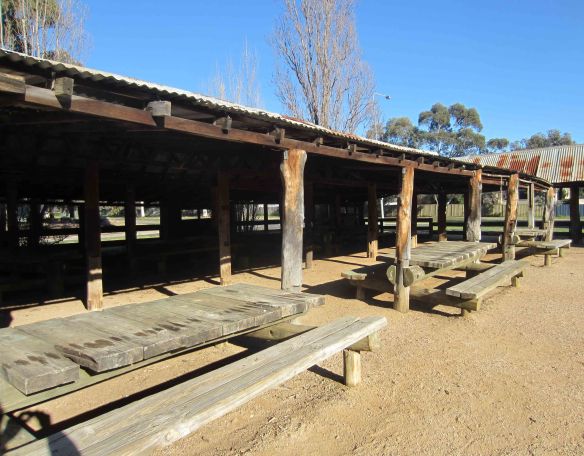 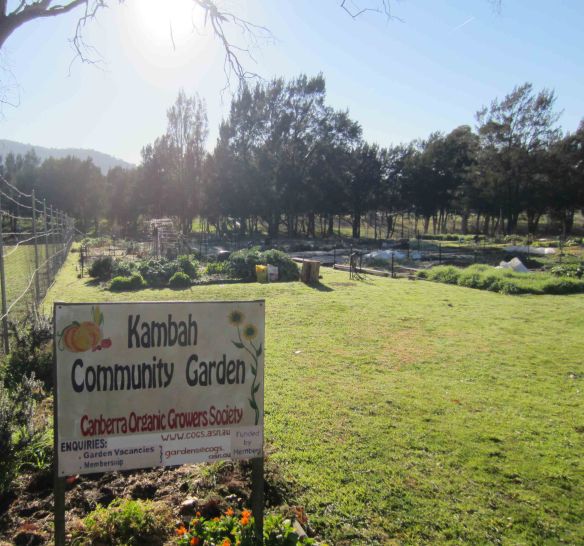 … and the adjacent community garden where horseshoes and metal parts of horse-drawn ploughs and carts have been dug up.

A little over seven kilometres into the walk, across Drakeford Drive from the Kambah Shopping Village, we stopped for a rest at the side of a football field. I ate the first of my bananas and sipped water. Then it was on to the nearby intersection where we would strike left up Namatjira Drive towards Weston Creek. On the other side of the intersection I saw a large box-like building with the word Eternity staring in large letters from its featureless, grey wall. From a distance I thought it might be a factory, perhaps manufacturing washing powder or perfume. But it is in fact a church in the pentecostal-charismatic mould. According to the church’s web site “It has been said many times that Canberra is a city without a soul. Our goal is to change this.” Sounds noble and generous, doesn’t it, especially when you don’t bother to define the word “soul.” 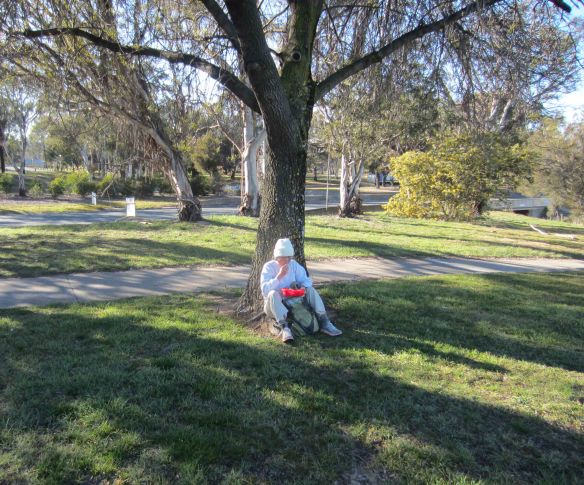 Time for a quick snack and drink. 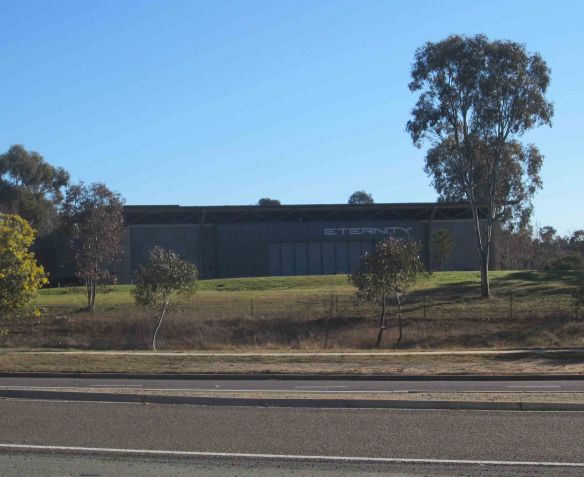 Between 1932 and 1967 a former soldier, petty criminal, alcoholic and late-life convert to Christianity by the name of Arthur Stace wandered the streets of Sydney by night chalking “Eternity” onto footpaths and walls. It is estimated he wrote the word more than half a million times. The people of Sydney – whose lives revolve around making money, shopping, sport, drinking and loafing at the beach – eventually noticed it and (characteristically) registered it as a trademark. Today the word has acquired mantra-like status in some corners of Australia’s Christian community. Canberra’s Eternity Church used to be known as the Parkway Church (named after the adjacent highway) but a few years back it changed its name, choosing to surf on the unique history and spooky overtones of “Eternity.” The church is popular, so it was a good marketing move. 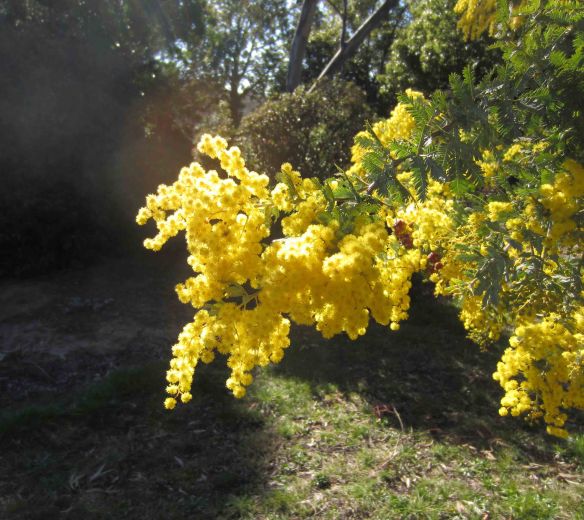 The last leg of the walk took us through the leafy suburbs of Chapman and Stirling down to Hindmarsh Drive and across to the Cooleman Court shopping centre. There we enjoyed a leisurely drink before catching a bus to Woden, then another south to Tuggeranong and a final walk of two kilometres back home. I felt quietly pleased. Sure, it was only a two-banana walk, but it had taken us through varied environments: suburban footpaths, beautiful tree-filled parks, lakeside pathways, farmland, even a modestly testing hill.

And at the end of the walk there were no distress signals of any kind from any quarter of my ageing body. 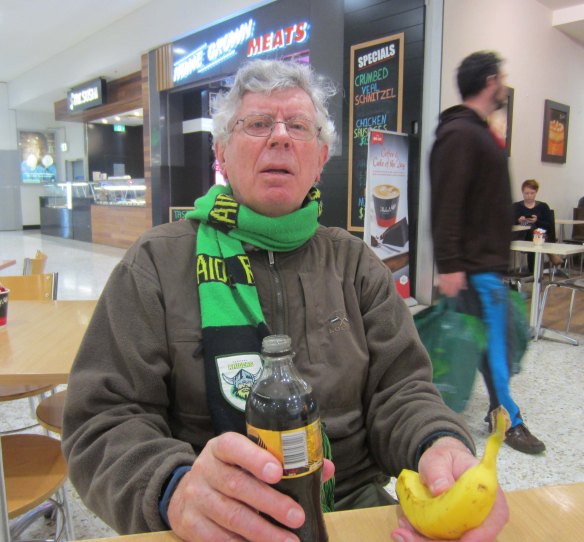 At Cooleman Court shopping centre I measure the distance we have travelled.