We stepped from the friendly ambience of the Kibbutz Lavi Hotel into the mild warmth of a clear Thursday morning. Our path took us across the central installations of the kibbutz: chicken runs, cow sheds, a petrol station, yards full of agricultural machinery, stables, workshops, offices, staff houses…

We walked along a well-defined path into neat fields, curving towards the low prominence of the Horns of Hattin. The big hill has a couple of lumps in it like protrusions growing on the head of a young bull. Everywhere in Israel visitors are either ogling history or trampling over it. Here you can do both. In 1187 Crusader forces clashed with the Muslim army of Saladin in the open country under the Horns of Hattin, right where we were walking. Saladin routed the Crusaders, putting an end to European Christian power in the Levant until Napoleon turned up at the end of the 1700s.

We reached a T-junction in the path, with an innocently inviting turn to the left and an equally inviting wriggle of pathway to the right. Both options were marked with trail blazes, so we consulted our map. The path to the left looked shorter. No-brainer… we turned left.

A gently rising staircase took us upwards and around the contours of the hill. A vast panorama opened up beneath us: the distant white roofs of factories and glasshouses glinting in the sun, shimmering villages and townships, green and yellow fields, a busy highway with insect-like cars creeping along it. We gulped big breaths of clean air and stopped for a selfie or two. How good it was to walk free and strong with the world spread out below us. 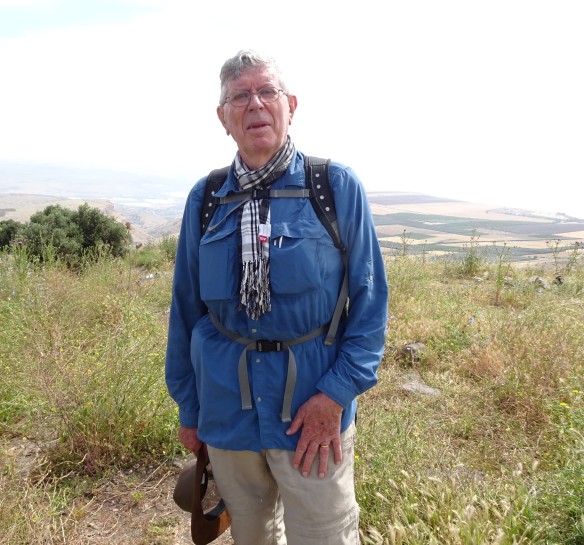 I pose on the heights between Lavi and Arbel, innocently (or arrogantly?) unaware that our old age is about to be tested on surfaces rougher than we’ve ever walked on before.

Hmmm… within an hour that sentimental froth had been whipped away from us. The path turned nasty. REALLY nasty. A trap snapped shut… there was no turning back. For the next four hours we had to struggle forward over the most difficult walking terrain we have ever encountered in the ten years of our walking careers. It wasn’t a long distance, but it was slow going and harrowing while it lasted.

Here is our “path”. Yes, it is an “official” pathway. Note the trail marker on a rock bottom left.

Emmy comes up a slope, balancing precariously on the rocky surface.

The track ascended and descended steeply, sometimes precipitously. Over considerable distances (at least it felt “considerable” to us) the surface was boulders and rocks. Not a “path” at all. Yet it was the path, marked at regular intervals with official trail markers. We couldn’t leap from boulder to boulder as young walkers might have done, or mountain goats. In places we had to wobble forward, inch by tiny inch, testing every step with our poles, maneuvering among the crevices, crawling, or sliding on our bums in places. Being old, we were fearful of a fall or a sprain. At one point I slipped on to my back between two rocks. I couldn’t fold my legs under me, or find support for my arms on the smooth surface of the stones. Emmy couldn’t get close enough to help. It took me five minutes to get upright. The combination of old age and boulders is not a good one. 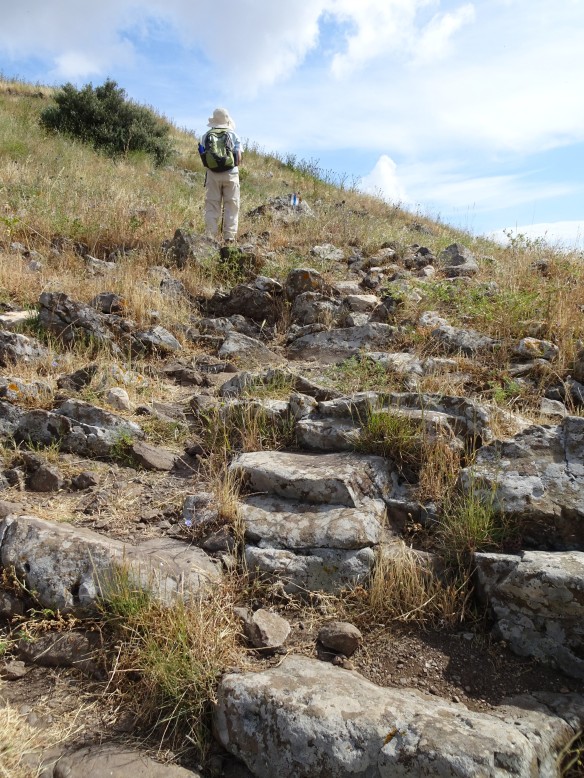 Maybe over that crest the path will smooth out and it will be easy going again. Totally alone, we had no help but hope.

When we emerged from the grass and stones above the village of Kfar Zeitim, we were aching, dehydrated and exhausted. In the distance we could see our destination, the hamlet of Moshav Arbel. Behind it, through a gash in the hills, we could also see the burnished steel of Kinneret, the Sea of Galilee.

Kinneret visible in the distance, and our destination, Moshav Arbel, visible centre-right. We still have around two hours of walking (trudging? plodding? staggering?) ahead of us.

Another hour brought us to a highway leading east towards Arbel. As we drooped along the shoulder of the road a car skidded to a stop beside us.

A miraculous flash of energy teleported us instantaneously into the car where we met Corinne, the young driver. In ten minutes she had whisked us to our accommodation at the Arbel Holiday Homes. We thanked her profusely, but we couldn’t find words to tell her how deep our gratitude really was. Corinne didn’t care. In the spirit of true generosity she simply gave us a cheery wave and drove off.

The proprietors of Arbel Holiday Homes, Ben Konowitz and his wife, greeted us warmly and ushered us to a simple but comfortable cabin. I started to tell Ben of our sufferings. With a glimmer of Jewish humour and the slightest of smiles, he waved my lament away.