…follows the Israel Trail blazes on a steep but beautiful route down a cliff face. […] Be careful as you descend. There is a bridge with handholds in the rock to assist you in the steepest section. The path can be slippery when damp, and park authorities do not allow hikers to descend in wet weather.

This put the wind up us. We were not reassured by the history of the cliff. According to the historian Josephus in his Jewish War (written around 75 CE), the troops of Herod the Great winkled Jewish rebels out of their holes in the Arbel cliff “by lowering down his soldiers in large baskets on ropes to pull out the rebels, causing them to fall to their deaths.”

For us, clearly discretion was going to get the better of valour. Still suffering from the exhaustion of the previous day’s walk we decided to take a taxi from our overnight accommodation, past the cliff-face descent, down to the edge of the Sea of Galilee / Kinneret. Please forgive us, dear reader.

At the town of Tabgha we joined a throng of tourists and wide-eyed Christian pilgrims at the Church of the Multiplication of Loaves and Fishes. According to all four Gospels, at Bethsaida, about seven kilometres north-east of modern Tabgha, Jesus turned two fishes and five loaves of bread into a meal sufficient for five thousand people. There was even food left over. (I’ve always wondered whether the fish was cooked or not. Did the 5,000 have to light fires and cook the fish, or was it miraculously already cooked when distributed. Just asking.)

In the Church of the Multiplication of Loaves and Fishes visitors light candles before a Greek-style icon of Jesus. They also pray, prostrate themselves on the floor, and (of course) take photos. A picturesque, Byzantine-style mosaic representing fish and loaves lies stamped into the floor in front of the altar. The image has been turned into a hundred different souvenirs snapped up by tourists in the adjacent gift shop. We too invested. We bought the image on a set of table mats that (hopefully) will help us feel more thankful as we tuck into our regular meal of grilled salmon and bread rolls back in Canberra.

A Byzantine-style fish and loaves image on the floor before the altar of the Church of the Multiplication of Fishes and Loaves in Tabgha. 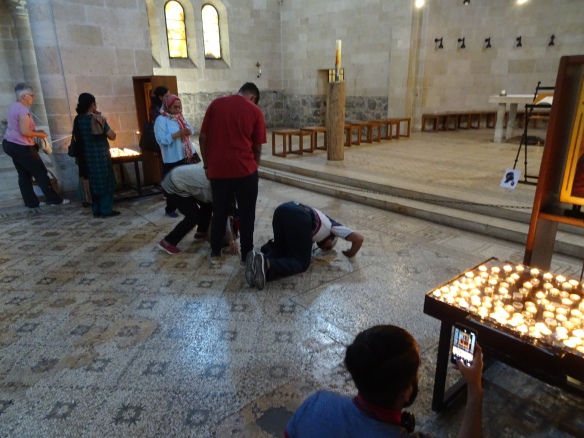 The faithful prostrate themselves on the floor before the altar.

No more than two hundred metres down the road stands the lakeside Church of the Primacy of St. Peter. It commemorates the moment recounted in the Gospel of Matthew (chapter 16 verses 16-18) when, after his resurrection, Jesus spoke to his friend and follower Simon Peter, telling him “you are Peter, and on this rock I will build my church.” Jesus was making a play on words. “Peter” is derived from the Greek word “petros” meaning “rock”. (Peter’s Aramaic name Cephas is also taken to mean “stone” or “rock”.)

Hammering home the metaphor, a large rock fills the Church of the Primacy of St. Peter, believed by many to be the first leader and the founding “rock” of the Christian church. 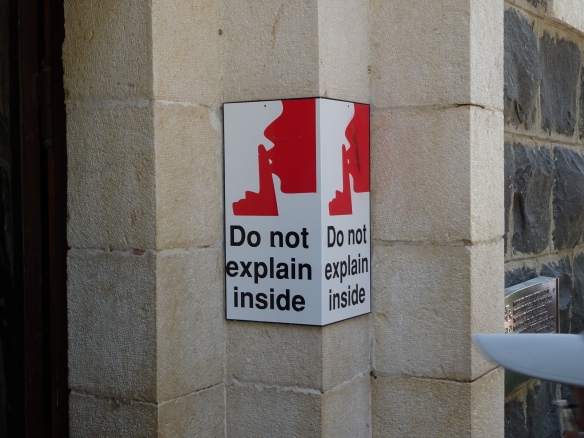 A sign at the front door of the Church of the Primacy of St. Peter. As a die-hard religious sceptic I interpret the sign to mean “This is a church, rational explanations have no place here… please, no thinking allowed, just have faith”.

The relentless crowds inside the beautiful but simple church have compelled real worshippers to shift outside. Under trees beside the church there is a small open-air chapel where we saw priests conducting a Catholic mass for a congregation of about 25 devotees. Nearby, visitors crowded a small, pebbly beach and looked out across the calm of Kinneret towards the Golan Heights on the opposite shore. Some removed their shoes to stand ankle-deep in the holy water, dextrously recording themselves with selfies as they did so.

We have arrived. I stand outside the Church of St. Peter in Tabgha, and below…

… Emmy stands on the pebbly shore of the Sea of Galilee, near where Jesus is said to have walked on water.

The final leg of our walk took us three kilometres along a picturesque, neatly paved, lakeside path to a park built around several small religious buildings on the long-abandoned site of Kfar Nahum (Capernaum), the village where Jesus is said to have based his ministry. We had reached the end of the 65 kilometre Jesus Trail. After subtracting the taxi rides in Nazareth on the first day, and Arbel on the last day, we had walked somewhere between 50 and 55 kilometres. We had seen much of the beauty and diversity of Israel, as well as its disturbing divisions. And our ancient bones, muscles and brains had survived the rigours of the walk. We felt pretty satisfied with that.

Exhaustion was still clamped around our legs like manacles, so we decided to return to Jerusalem direct by taxi. Our driver took us around the northern curve of Kinneret and down the eastern shore, squeezing between the lake to the west and the beetling presence of the Golan Heights to the east. We went south through the town of Beit She’an and, unchecked, through a border crossing into the Israeli-occupied West Bank. We were on Highway 90, which is forbidden to Palestinians except with special permits. It runs the full length of the occupied West Bank. In the northern sector it sticks close to the Jordan River. The countryside left and right of the road has largely been de-populated (for “security reasons” say the Israelis). Ethnically cleansed is a more accurate term. The former population of Palestinian Arabs has been uprooted and shifted west, mostly to the major urban centres of Nablus, Ramallah and (further south) Hebron. In the northern sector the eerily empty landscape is filled with low hills of tawny grass, punctuated here and there with market gardens and plantations of dates, olives and bananas. In places there are derelict houses of the former Arab population, and once, we saw rows of stumps marking (according to our Jewish driver) a destroyed Palestinian olive grove. Here and there the highway passes squalid Bedouin communities, their tents filled with goats and surrounded by litter. The highway curves around the Palestinian town of Jericho, just north of the Dead Sea, and heads west into Jerusalem, passing signs pointing left and right to the prosperous Jewish settlements of Ma’ale Adumim. On this Jews/foreigners-only route, Palestinians are rendered almost invisible in their own land.

The occupied West Bank and Gaza are the conscience of Israel… and it is a very ugly sight.