Emerald green and grey, the colours of the Irish countryside along the Burren Way, here exemplified in shamrocks…

On the morning of July 24th Emmy and I walked out of Doolin heading for the seaside hamlet of Fanore, twenty kilometres to the north. It was a quiet day of unremarkable walking, just what we needed after the small stresses of the previous two days. Our path took us inland through pastureland, along deserted village roads between hedgerows of tangled blackberry and endless low walls of rough-cut stone. The temperature was a cool seventeen degrees. The sky hung over us low and grey, sending us two short sharp showers of misty rain. From the high slopes above the coast we could look out over the Atlantic Ocean and see the blurred spectres of the Aran Islands stretched along the horizon.

The view out to the Aran Islands from the Irish mainland between Doolin and Fanore in County Clare.

The walking was quiet and easy, between kilometres of stone walls through treeless pasture.

The sea wind muscled in through the open front door of our B&B in Fanore, rattling doors and filling the big house with a subdued howling and groaning. We dined on the deservedly famous fish and chips at O’Donohoe’s pub, and (with the front door of the B&B shut and the house silent) we slept soundly. The following day dawned dark. A glance from our bedroom window revealed rain sparkling on sheets of water along the coast road. Today we would not be walking over miles of slippery flat stones in the treeless expanse of the Burren hills, aptly described as “a landscape of bedrock incorporating a vast cracked pavement of glacial-era limestone”. Around midday, huddled against bullying showers, we stood opposite O’Donohoe’s pub and flagged down a local bus for the twenty kilometre trip to our next stop, the neat little town of Ballyvaughan on the southern shores of Galway Bay. 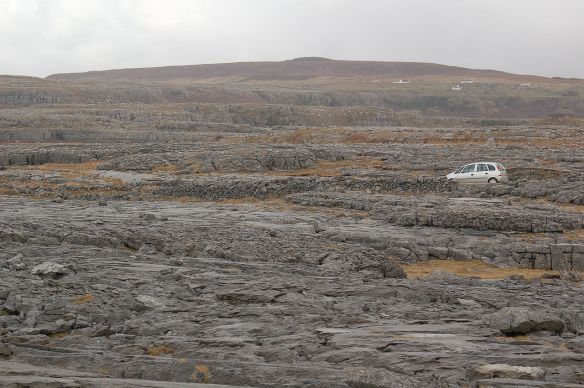 The rocky Burren hills. Not for us… at least not on a day of misty rain. (Photo by Fish Cop, Wikimedia public domain)

Our B&B – the Ballyvaughan Lodge – was one of the most welcoming, most comfortable and best run we have stayed in during our many years of multi-day walking. Our host, Gerry, was more than welcoming. He took the trouble to immediately learn the names of all his guests and always addressed them by name. He served a very special breakfast on tables with starched tablecloths and serviettes embroidered with the house initials. The tea even came in porcelain teapots kitted out in woolen cozies. The breakfast omelette “with the lot” – prepared by Gerry’s wife Pauline – was the best omelette I have ever tasted, far surpassing that served in the five-star Dublin hotel where we stayed the following week. Emmy ordered “soldiers” (without really knowing what they were). The soldiers turned out to be fingers of toast that came with a soft-boiled egg served in its own little woolen beanie. When the top of the egg was sliced off, the bars of toast were dipped into the soft yolk and lifted in your fingers to be eaten. Emmy found this dish so unbelievable that she ordered it again the following morning just to reassure herself it was not a kitchen accident, or a figment of her imagination.

Breakfast at the Ballyvaughan Lodge, and this was just for starters! 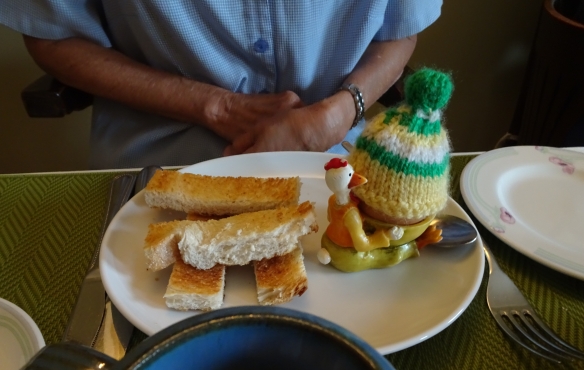 Toasted “soldiers” with a soft-boiled egg under the beanie to the right.

So it took a special effort for us to lace up our boots, fill our water bottles, shoulder our backpacks, and head out for the final day’s walk on the Burren Way itinerary. It was a loop walk that snaked ten kilometres through woodland and deserted backroads past the vast “cracked pavement” of the Burren hills, returning us four hours later to our beginning point in Ballyvaughan. The walk turned out to be a little more demanding than we expected. It was well way-marked, and we had a good map and instructions, but we had to keep our wits about us. The problem was the lush growth of summer grass that concealed the track in several places, plus the week’s non-stop showers that, here and there, had erased the track under runnels of mud. Several times I consulted our GPS phone app to check our position and get back on track after straying off the route.

Our map of the Ballyvaughan Wood Loop. The left side of the heart-shaped loop was mostly woods and pasture, tangled and wet on the day we walked it. The right side was quiet farm roads. The halfway point of the walk was the Aillwee Caves (bottom centre) where we stopped for lunch. Ignore the 2:30 hours estimated duration of the walk in the top line. It took us more than four hours, although this did include a light lunch at the Aillwee Caves.

Here be leprechauns, banshees and fairies. Note the way-markers on the right.

An unexpected danger. Apparently the chickens of Ireland are particularly vicious.

But it was a very satisfying final outing. That evening, as we dined on juicy lamb shanks in Ballyvaughan’s Wild Atlantic restaurant, we were able to look each other in the eye and say “we did it!” We walked for a month through Germany, France and Ireland. A few times we took short-cuts or traveled a segment of our route by bus or taxi, but altogether we had walked about 160 kilometres. We had toughened up, we had enjoyed extraordinary hospitality, we had seen beautiful sights and eaten good food (and some truly terrible food too) and met many warm personalities. We had also been mentally challenged (travel and hiking are always a bit unpredictable), we had been invigorated by the sweetness of solitude and each other’s company, and we had lost weight (though not a lot). Now it was time to head home to the chill of Canberra’s winter. 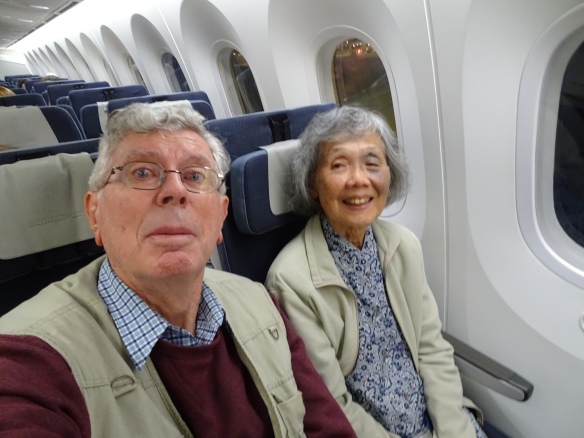 Mission accomplished. We’re on our way home, but we’ll be coming back. 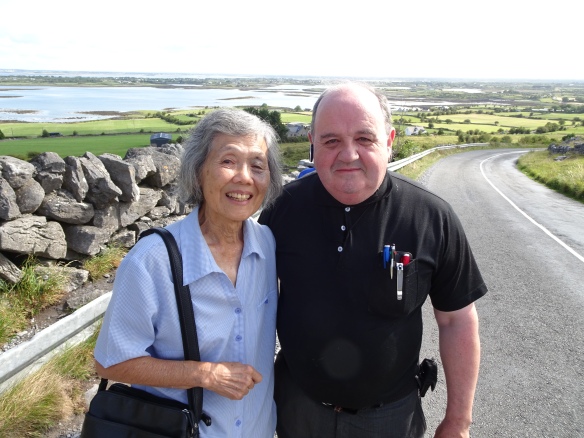 With Denis, on a detour to show us the views over Galway Bay. For the instant required to take this photo, Denis stopped talking. In the space of one hour with him, we learned everything about Ireland, from superannuation to immigration, to foreign policy, to the impact of Brexit, to divorce and the Catholic church. It was a pleasure to be his customer.

As we lifted off from Dublin Airport I saw before me a gallery of the Irish people we had met since touching down at Shannon. Declan who drove us from Shannon to Liscannor and insisted on wrangling our two heavy suitcases, one by one, from the boot of his taxi twenty-five metres through light rain into the reception desk in the Cliffs of Moher Hotel; the effusively warm Kimberley at the Cliffs of Moher Hotel, originally from California but now more Irish than the Irish; PJ at the Seacoast Lodge in Fanore who told me that, with the name “Quinn”, I was more Irish than he was (I barely understood his heavy Irish accent); Gerry and Pauline, hosts extraordinaire at the Ballyvaughan Lodge and custodians of the world’s best breakfast; and the garrulous Denis who drove us from Ballyvaughan to Galway railway station, taking a lengthy detour at no extra cost to show us scenic panoramas we would never otherwise have seen. Plus the nameless young woman who jumped from her car when she saw us consulting our map at an intersection outside Doolin. She had auburn hair with ginger highlights, bright hazel-green eyes and a pasty-white complexion studded with freckles. In short, an epitome of Irish beauty. She had even painted her fingernails shamrock green. She quickly set us on the right path, recommending the fish and chips in Fanore as she sped off.

Emmy looked wistfully out the airplane window. “Let’s come back,” she said. It was the very first time she had ever said this at the conclusion of a walk. 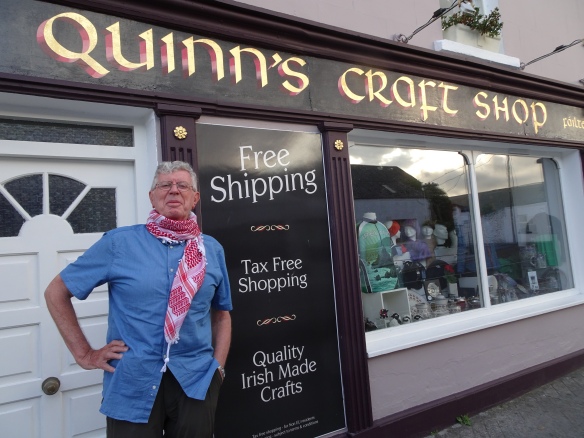 I reconnect with my heritage in the main street of Ballyvaughan.