The view from our hotel window in Dinkelsbuhl, and below…

… the hotel itself (centre) with an open-air café in front of it.

Dinkelsbuhl is a remarkable town. Its walled centre preserves an astonishing array of wide-fronted, multistorey houses with peaked, steeply raked roofs dating from the 16th and 17th centuries. They stand in packed ranks along the town’s narrow streets. Most are neatly painted in pastel colours – creamy yellow, light orange, beige, moss green. Some stand out in scarlet, lemon yellow or brilliant white. Outwardly they are beautifully maintained with few concessions to the 21st century, but behind the neat facades everything is impeccably hi-tech and modern.

Somehow Dinkelsbuhl avoids being Disney-tacky. The locals are not decked out in faux-medieval costumes. The streets are narrow and cobbled as they were 500 years ago, with, in some cases, houses leaning over and looking down into them, each successive floor overhanging the one beneath. Public signage is in German gothic script. The Brothaus bakery – where we twice feasted on sweet pastries and cake-like bread rolls – tells customers it has been doing business in the same spot since 1616. A soaring 16th century stone church – St.George’s Minster – stands at the hub of the town.

We took a tour of the town in a large roofed cart pulled by two giant horses. As the waggoner – who was also our guide – waited for his cart to fill with customers, from time to time he took a sip from a huge glass of beer, each time returning the glass to its storage place under his seat. Apparently the prohibition on drink-driving doesn’t apply to horse-and-cart drivers.

The narrow streets of Dinkelsbuhl seen from a horse-drawn cart.

An unpleasant incident occurred during the tour. As we clopped at walking pace through a web of alleys our guide gave us a lively commentary in German. Emmy and I didn’t understand a word of it, but following his outstretched finger we saw exotic sights we might not otherwise have noticed. We enjoyed his eccentric personality and the flow of his patter, and we joined in the outbreaks of laughter from the mostly German-speaking passengers. But a bookish-looking, grey-haired gentleman hugging an English-language guidebook was looking resentful. About twenty minutes into the hour-long tour he suddenly shouted “Stop!” The waggoner put his foot on the brake pedal and called out “Brrrrrr” to the horses. In the middle of a narrow street, with cars queueing behind us, the gentleman with his entourage of three crinkly ladies got off. “It’s all in German!” he announced indignantly (in English) to the German passengers. The waggoner’s eyebrows resumed their place over his eyes, and with the smallest hint of a smile he snapped the reins. The horses clopped forward. It had been a tiny but telling glimpse of English-language arrogance.

The picturesque hamlet of Raustetten. Our accommodation at the Waldeck Hotel is the building visible at the left edge of the village.

The fifth day of the Romantische Strasse took us from the hamlet of Raustetten south of Dinkelsbuhl, over a succession of easy paths 20 kms into the ancient town of Nordlingen. Walking conditions were perfect, with cool temperatures and motionless air under a hazy sky. 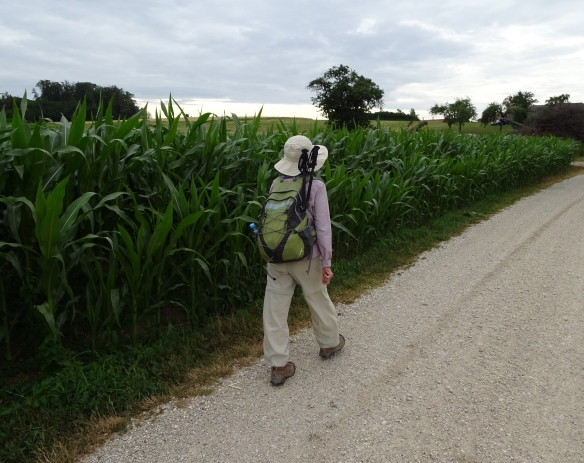 Easy walking on the morning of our last day…

… but light rain joined us around 11:00 am and stayed with us for the rest of the day.

But around eleven o’clock small spots of rain began to tick against our faces. The hazy sky was still high and bright, but it cast a fine drizzle over us. We broke out our rain jackets and walked on, hunched under our backpacks like a couple of Quasimodos. The rain stayed with us until we reached the ancient, almost perfectly circular defensive wall around Nordlingen at three in the afternoon. We passed through an arched stone gate into the town’s glistening alleys. We had reached the end of the walk. We averaged 18 kilometres a day over five days.

The religious piety of former times is visible everywhere along the road between Dinkelsbuhl and Nordlingen. Here a forest sign reminds walkers that “God preserves the wilds and woods.” Or is it an entreaty? “God, preserve the wilds and woods!” 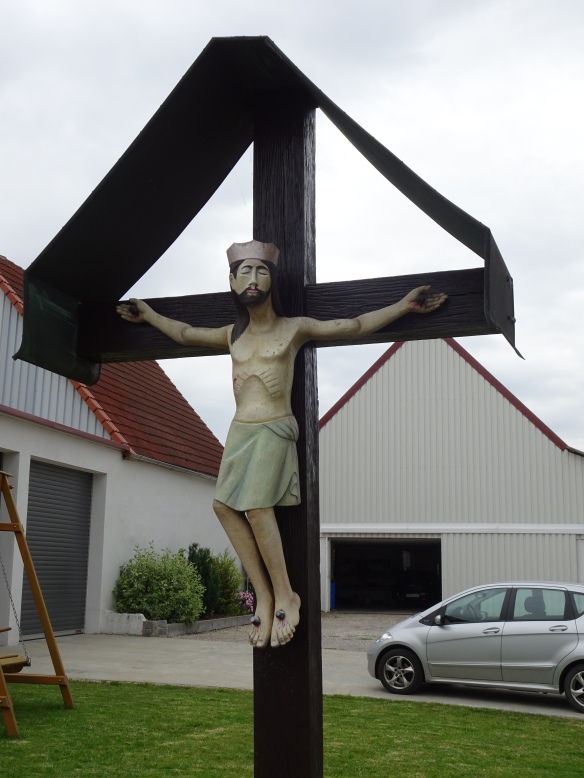 Here are just three of about a dozen wayside crucifixes on the path between Raustetten and Nordlingen. In the more secular 21st century, perhaps they are speaking to passing hikers. “You think you’re suffering? Look up here. You’ve got it easy, mate!”

Getting into Nordlingen was easy, but it proved hard to escape. The following day I went outside the town’s old walls to the railway station to buy tickets to our next destination, Zurich. The station was hard to find. Under a shroud of canvas behind temporary fencing, it was under reconstruction. It had been totally gutted. There was no ticket office behind the empty eyes of its windows. Amidst the scaffolding on the deserted platform stood an automatic ticket vending machine. Its instructions were all in German (abfahrt, fahrtkarten, bahnhof, gesamt) and I could not bring up Zurich on the screen. We trudged back into the centre of town and headed for the tourist information office.

“Can I go from Nordlingen to Zurich by train?”

The helpful matron behind the counter looked startled. She tapped at her computer.

I could see Emmy weighing our two big suitcases in her mind’s eye, then adding the heavy bulk of our backpacks. No way, she signalled to me.

The information officer looked at us with curiosity.

“Why don’t you just leave the same way you came?”

“We walked to Nordlingen from Rothenburg. It’s a long way. We’re not walking back!”

She was standing right beside a tall poster advertising the invigorating benefits of walking Germany’s Romantic Road. Evidently it was the first time she had seen a real Romantic Road walker. Perhaps she didn’t expect us to be grey-headed and wrinkled.

My solution was an expensive one. On Saturday, July 13th I hired a taxi to take us and our baggage the 100+ kilometres to Stuttgart Station where I was able to buy a train ticket direct to Zurich. Easy.

Arrival in Nordlingen. Emmy is thriving, while that shrivelled creature in the background is definitely struggling.

2 thoughts on “Germany’s Romantic Road (Second Half): Dinkelsbuhl to Nordlingen”