Welcome to the Soggy Chip awards for bad food (known as “The Soggies”). This famous award is for dodgy food served to famished Australian walkers in restaurants and pubs across the UK. There were many nominations and the judges have had great difficulty narrowing them down to a short list, but after intensive discussion and very scientific scrutiny they have arrived at three outstanding nominations.

Griddle-cooked pancakes with bacon and (in jug at top right) sweet maple sauce.

When the judges saw this dish advertised in the window of a restaurant they were incredulous. Could it really be true that bacon was being eaten with sweet maple syrup? Sadly, it was true. The dish consisted of three big griddle-cooked pancakes (known locally as pikelets) interleaved with greasy rashers of bacon. A jug of very sweet, very dark maple syrup was also supplied to be tipped generously over the hot bacon and pancakes. The syrup came with two small packets of butter, though it was unclear whether the butter was to be added to the syrup or spread on the bacon.

Aromatic belly pork on a bed of mashed potato.

2. Belly pork on a bed of mashed potato, The Crown Inn, Coniston (Cumbria).

The thick slice of belly pork was intimidating. It consisted of extremely salty, rock-hard crackle, and several layers of glistening pork meat cooked to varying levels of done-ness. The meat lay across a mound of mashed spud next to half a dozen well-boiled but very emaciated runner beans. A thin gravy had been found somewhere and splashed over the plate. A unique feature of the dish was the farmyard smell of the pork… a whiff of… what could it be? Fodder pellets? Diesel? Dung? 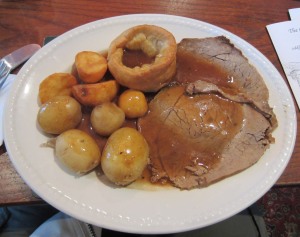 According to the menu the roast beef came from prime Cumbrian cattle. This may well have been the case but it was referring to a cow that lived several decades ago. The meat was not tender but crumbly. It disintegrated when the fork touched it and the fragments had to be scooped up with a teaspoon. The Yorkshire pudding was in fact a deep frozen pastry shell in disguise. It was rubbery and very resistant to the sawing motions of a knife. The roast potatoes were fine, and so were the boiled potatoes provided one overlooked the raw interior of the potato. There were no greens.

And the winner is…

… the belly pork on a bed of mashed potato. An unforgettable meal, the aroma of which clung to one’s clothes for several days afterwards.

And now for the special awards…

The dining room at the Volunteer Inn lies right behind the front bar. In fact you can look from the dining room over a counter, through an archway, past shelves crammed with bottles, into the bar. In the morning the room serves as the Inn’s breakfast room. In the evening it becomes the Maharaja Indian Restaurant, operated by a small squad of stony-faced Indians who put long-stemmed glasses on the tables and carefully guard a small hoard of laminated menus stacked on a sideboard.

Emmy and I are fond of Indian food so we were looking forward to our meal on the evening of August 16th. Behind the counter one of the staff busied himself with administrative matters, frowning over bills and receipts, jabbing at a calculator, making entries in a ledger, and occasionally taking phone calls. His associate took orders from diners and served the food. He also steered carefully between the bar and the dining room carrying bottles of wine and glasses of cider. Neither of the staff cracked a smile. Not once.

There was a long moment of stunned silence. Then an incredulous squeak.

Ten minutes later (I’m not exaggerating the time lapse here) a single cup of tea arrived. It was about two thirds full of water with a tea bag drifting in it. After I fished out the tea bag the water level dropped to less than half a cup. At a neighbouring table wine gushed from bottles and cider twinkled in huge glasses.

The dish of curried lamb shanks was tasty, but its gastronomic appeal was marred by the £1.80 (about $3.00 Australian) I had to fork out for a tea bag and half a cup of warm water.

“It’s his favourite place,” said our hostess giving him an indulgent pat. So we didn’t disturb him. We made ourselves as comfortable as we could sitting side-by-side on the bed. We learned that in total three cats lived permanently at The Travellers Rest. Their names were Maddie, Zuki and Quinn. Yes, I’m afraid so… Quinn, named, I believe, after Dr Quinn Medicine Woman, an American TV show.

All three cats appeared in the dining room that evening. They stalked the floor for a while, sharpening their claws on the rough wooden pillar that supported a ceiling beam in the middle of the room before disappearing out the back in the direction of the kitchen. They appeared again the following morning as we were having breakfast. I was about to put a fatty piece of sausage into my mouth when there was a sharp shout:

I quickly lowered my fork and looked around. Two cats were facing each other on the dining room floor, growling and swishing their tails. Our hostess was looking at them fondly.

“They’re always irritable in the morning before they’ve had breakfast.”

Later there was the sound of loud hawking and retching. One of the cats coughed up a furball on the dining room floor. The front door was propped open to clear the sour odour and a clammy hand of morning chill reached in to touch us on the neck as we ate. 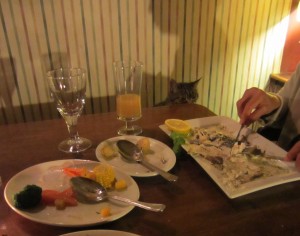 A hungry cat joins us for dinner in the Travellers Rest Restaurant.

That evening, as we enjoyed an excellent dinner of lamb cutlets with Welsh leeks, the cats again joined us. There was a scrabbling and hissing under the table as they fought for position. The winner seized the right to sit on a chair and peer up over the edge of the table. Its head nodded up and down as it followed the transfer of lamb cutlet from plate to mouth. When dessert arrived the cats disappeared.

“They’re not really interested in sugary food,” our hostess explained.

The organisers of the world famous Soggy Chip awards have received an appeal against their decision to award a Soggy to Coniston’s “belly pork on a bed of mashed potato”. It has come to their attention that the chief judge actually enjoyed the meal. He was observed crunching through the crackle with special relish. Apparently he was considering ordering a second helping. The plaintifs are arguing that enjoyment of a meal disqualifies it from a Soggy award. The organisers of the award are in a panic. They have now found out that the chief judge actually enjoyed all the nominated meals (including – perhaps especially – the griddle-cooked pancakes with bacon and maple sauce). A decision on the appeal is pending. The awards are in disarray.

[Next up: Encounters with animals and wildflowers along the Cotswold Way.]