Our host at the Quinta das Alfaias in Fajozes was the cultivated and quietly eccentric Joao, husband of the indefatigable Teresa. As he introduced himself he raised his hand and pinched his nose.

“Joao,” he said, then insisted that I too pinch my nose as I said his name, to ensure I got the nasalised Portuguese pronunciation correct.

At dinner on Thursday night, Emmy and I were joined by a bishop of the Lutheran Church in Norway and his social-worker wife. Joao gently turned the conversation to religion. The bishop gave an up-beat assessment of Christianity in Norway, claiming that 78% of the population were Lutherans and that religious faith was gaining ground among the young people of his country. He was not boastful, but he did sound more like a PR man or an accountant than a priest of the church.

“And you, Joao,” I asked. “What is your religion?”
“Of course I am a Catholic, like almost all Portuguese.
“And what does Catholicism mean to you?”
He was silent, his long, mournful Iberian face and large eyes suddenly sardonic.
“I will tell you,” he answered in deep, slow, heavily accented English. “It means three things: be honest, pay your debts, and do no harm to anyone.”
“That doesn’t sound like mainstream Catholic dogma,” I said. “It sounds more like Confucius or an ancient Greek stoic.”
He seemed pleased with this comment, but made no response. Instead he put an artificial cigarette to his lips and drew on it, causing its tip to glow with a bright red, smokeless electric light. Behind the light his eyes were inscrutable.

As we slept on Thursday night a thick fog unrolled its silence over the countryside. Looking out on the garden in the morning the trees emerged and faded away like rigid ghosts, and the quinta’s pet birds made their shrill cries from behind a white-grey curtain. After a late breakfast, Emmy and I headed away from the quinta towards the Camino route with mist still blurring the distant tree-scapes. We were alone again, following a serpentine path through cornfields and stands of tall eucalyptus.

The previous night I had asked Joao about the Australian eucalyptus trees that dumped their leaf litter along the roadsides of Portugal and scented the hot air of mid afternoon with eucalyptus aroma.
His eyes smouldered momentarily. Joao disliked eucalyptus trees. In fact it would be more accurate to say he despised them.
“They are an Australian disease. They suck up water and destroy the environment that supports native plants.”

Nowhere to escape: trapped between traffic and high walls

On the Camino again we found ourselves walking on the edge of a narrow highway. The road was jammed between stone walls, sometimes for a kilometre or more at a time, with no footpath, nor even much of a shoulder or gutter. We walked on the left hand side so as to face on-coming traffic. Again and again we had to press ourselves against the wall beside us as big, fast-moving cargo trucks passed breathing hot air and diesel exhaust on to our necks.

For the first time, we heard the special greeting of the Camino. Two cyclists, splendid in elongated space-age helmets and shiny lycra, gave us a cheery “Bom Caminho” (pronounced /bong-ka-MEEN-yo/) as they buzzed past. And later in the day, in a rare moment of seclusion in a wooded section of the way, we came across our first fellow pilgrims. They were a husband and wife sitting on a rock drying their feet in the sun. The husband was tall and thin with a cavernous face, black hair and a swarthy complexion. His wife was short and plump with blond hair and a very fair complexion. We exchanged the “Bom Caminho” greeting. They were from Spain. The husband had started his walk in Lisbon and had been joined by his wife in Porto. Her face was streaming with sweat and she grimaced as she massaged her feet. She was doing it tough. But neither knew more than a word or two of English, and I knew only the numbers of Spanish, so after a couple of minutes waving our hands and pointing hopefully here and there, all communication stopped and we parted.

We were now walking deeper into the rich farmlands of northern Portugal. Huge sprinklers arched water over endless, dark green vistas of corn. Every house had its shady grottos of grape vines with small chandeliers of green berries already weighing heavy on the wires that supported them. Many houses were more like mini-mansions with Renault cars shining in their driveways. Tractors chugged up and down the roads.

But behind the outward signs of prosperity in this part of Portugal (elsewhere, especially in Porto, genteel poverty is more the rule) primordial religion seems to be thriving. Repeatedly we encountered roadside shrines that were obviously still in daily use. Characteristically these shrines are set into alcoves in roadside walls or in the facades of houses. About the size of a small window they hold an icon-like picture representing Christ, or Mary, or a local saint, or the “holy family”. Most of the images are painted on tiles and form the backdrop of the shrine. In front of them candles burn and small posies of fresh flowers stand in tiny vases. The whole recess is gated with iron trelliswork that shuts like a door flush with the face of the wall.

After a night in the one-tractor hamlet of Arcos, sleeping peacefully in a restored, medieval stone house that was now a quinta, we headed out on to increasingly quiet and narrow rural roads towards the old town of Barcelos.

On the edge of Barcelos we turned into a suburban avenue of middle-class houses and shady trees with old, park-bench seats under them. Nineteen kilometres had glided by since we left Arcos, and I was feeling good. In fact I was feeling downright pleased with myself. To this point neither Emmy nor I had felt the need to use our walking poles. Apart from the danger of passing traffic, the walk had been straightforward compared with some of the preparatory walks we had done around Canberra. So far so good, I thought.

SLAM!! Something hit me hard in the face.

It was the ground. I was stretched out, stunned, my mouth full of sandy dirt. For a moment I couldn’t get up. I lay gasping, groping about for my glasses.
Emmy helped me to my feet and sat me on the park-bench we had just passed. She handed me my twisted glasses. I was suddenly frightened – were the lenses broken? If they were, we were in big trouble. As Emmy pulled our first aid kit from my backpack I fitted my glasses, all curled awry, on my face. The lenses were intact, and after straightening the wire frames as best I could, I took stock. One side of my face was bleeding, my knees were skinned and a small demon was stabbing me in the right side of my rib cage.

Emmy swabbed the blood off my cheeks and lips and smeared white antiseptic powder on the abrasions. Slowly my head cleared and I assembled a picture of what had happened. I had been walking with a spring in my step along the front edge of a park bench, when the bench – obviously tuned to my complacent thoughts – had thrust out a concrete foot and tripped me up. Top-heavy under my backpack, I had fallen very hard.

We trudged on over the final kilometre towards the centre of Barcelos, crossing the town’s medieval stone bridge and labouring up a small hill under the dark grey of a medieval church. In the small plaza beside the church we stopped and had a quick drink then pressed on through the picturesque old centre of town with its narrow cobbled alleys and high narrow buildings flanking the streets like bar-codes.

We passed a “Church of the Good Jesus” and, on impulse, I said to Emmy “Let’s go in and get our credencial stamped.” (More on the institution of the pilgrim’s credencial or “passport” in a later posting.) The old, outwardly grim stone walls of the church hid an extravagant interior. High above the altar a small portrait of Jesus was framed by a towering, elaborately carved baroque alcove painted entirely in gold (see picture). On the floor to one side stood a bigger than life-size, realistic carving of Jesus skewered on a crucifix.

The warden, wearing a tie and neatly pressed trousers, spoke not one syllable of English, but his eyes brightened when we presented our credencial for him to stamp. He hurried into a small office to one side and busied himself at a big desk. Meanwhile I sat on one of the backless benches in the body of the church and took in the small echoes and creaks of the airy vault above me.

Extravagant interior of the Church of Good Jesus, Barcelos.

When we emerged from the church I felt better. The Camino is not your average walking trail. It has surprises and lessons. Its mystique compels the walker to see its vistas and moods and events in a moral light as if it was a living thing – a living teacher. For me, the lesson of my near-disastrous fall was that stamina alone is not enough to complete the walk. Unflagging concentration is required as well. And a certain humility.

But humility is hard to do. As I sit writing these words in our hotel room in Ponte de Lima, I see my reflection in the mirror above the standard hotel table. 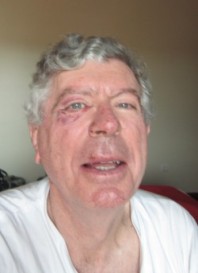 A bit blanched by camera flash, but you can still see my pride and joy.

My fall has given me a big black eye. I’ve never had a black eye before. It’s a beauty. I feel quite proud of it.